Both the .22-250 Rem and the .243 Win are widely used in small to medium game hunting across the world. With a really competitive score, both those rounds have a slight edge over the other. These cartridges have many names. Some of the most famous names of the compact .22-250 cartridges include .22 Varminter and .22-250 Remington. .22-250s are high velocity, short action rifle cartridges that are widely used to hunt small game animals like varmints and coyotes.

Known for the hydrostatic shock induced at the target, the .22-250  also has enough power to hunt deer. Due to a lower recoil count, they are a popular choice among female hunters.

Also known as the Whitetail round or the .243 Winchester, these rounds took whitetail hunting by storm after their introduction in 1955. They are still popular for hunting small-medium games; from varmints all the way up to blacktail deer, pronghorns, and mule deers.

With a high velocity and a low amount of recoil, the .243 Winchester also features exceptional accuracy within 300 yards. They are the first choice of many target and metallic silhouette shooters across the globe.

Despite being fast, accurate, and powerful, the mild but wild .243 Winchester rounds have never been used in the military.

The .22-250 Rem cartridges are a bit smaller in every dimension, providing better speed and control over the trajectory. That’s why they’re a good choice to use in bolt-action rifles.

With larger dimensions, the mighty .243 Win rounds feature more energy that can be used to take down small to medium games effectively. This brought about worldwide fame and made the rounds known as the “Whitetail Rounds.”

These powerful rounds can reach up to 2,900 fps with a 1,950 ft-lb energy, which is perfect for deer hunting. These cartridges are also decent at long-range shooting or target practice.

The .22-250 rounds are famous for their speed, and the less time the bullet is in the air, the less gravity will have time to pull it downward. As a result, At close range, the trajectory of .22-250 Rem cartridges is seemingly flat.

However, that isn’t enough to take down the mighty .243 Win rounds. 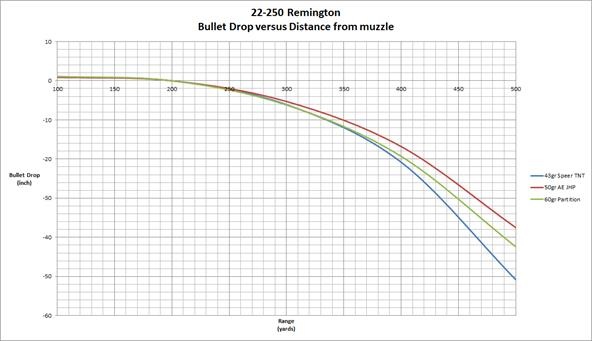 The .243 Win is a perfect combination of power and speed. The seemingly flat trajectory allows the .243 rounds to go on par with 300 Win Mag and 6.5 Creedmoor rounds, which are globally known to have flat trajectories within close ranges.

Everybody has their own tolerance for recoil. The .22-250, being the lighter of today’s duo, provides significantly lower recoil energy on your shoulder. With the .22-250 Rem cartridges, you’ll feel only a slight tap of about 6.7 ft-lbs on your shoulder.

That’s why these rounds are popular among people who don’t like to handle heavier recoil energy. With the .243 Win bullets, instead of a subtle tap on the shoulder, you’ll feel a bit of a rigid slap on your shoulder. These rounds generate around 11.25 ft-lbs of energy. Even though they are known as “shoulder-friendly”, on today’s trial, it weighs the rounds down a bit.

For those who are interested in the .243, but distressed with the recoil count, you can use a recoil pad to soften the blow even more.

Most people will hardly notice the difference between the .22-250 and the .243 in terms of accuracy. Even if the accuracy greatly varies depending on the shooter, both these powerful cartridges will provide exceptional accuracy, mainly due to their flatter trajectory.

Both these cartridges are known to provide superb accuracy at close range. However, the amount of recoil will also influence the accuracy of the .243 more than the .22-250, giving the .22-250 Rem rounds a slight edge.

Both our contestants today are capable enough to obtain sub-MOA accuracy. However, even if the recoil is minute, it will affect your accuracy; especially in longer ranges. With more firepower comes more recoil and that is what keeps the mighty .243 rounds in shadow today.

The .22-250 has been around for over half a century. As a result, it has become one of the main features of almost every major ammo manufacturer (like Barnes, Winchester, Federal, Fiocchi, Hornady). However, the rounds are not cheap.

The price of each round can cost from $1.50 (Practice ammo) to $2.50 (Dedicated hunting rounds). As for the rifles, every major firearm manufacturer also has at least one bolt-action rifle that can chamber the versatile .22-250 rounds. The .243 Win can go on par with the .22-250 Rem in terms of price range and availability. Just like the .22-250, almost all major firearm manufacturers have a bolt action or lever action that can shoot .243 rounds.

You can also find a wide variety to try out when it comes to reloading your cartridges by hand. However, With a slightly wider selection of bullets and loads to choose from, the .22-250 is at a slight advantage again.

It is the measurement of how well a bullet can penetrate a target. The higher the SD count, the deeper the bullet will go. This is especially important for long-range shooting.

As a varmint hunting round, we aren’t looking for a higher SD count as that can damage the pelt beyond help. The .22-250 takes the lead in varmint hunting with an SD count of 0.171 (60 gr Nosler Ballistic Tip).

Even if the .22-250 has a slight edge over the SD count, the variety to choose from a deer hunting load or a varmint load puts the .243 Win rounds back on the track.

In short, the Ballistic coefficient (BC) indicated how well a bullet can resist wind drift and air resistance. The higher the BC count, the better the bullet will perform in the air. The average BC count of the .22-250 Rem rounds is around 0.323.

The .243 Win round, with a slightly higher BC count (0.34) takes the cake here. What it means is that the additional firepower used in the .243 rounds (53-54.8 gr) provides a slightly better air resistance. This makes the .243 cartridges exceptionally good for hunting whitetail deers.

The .22-250 rounds are so popular in varmint hunting that the whole caliber has become synonymous with the word “varmint hunting”. After being widely adopted in 1963, these rounds have been used in hunting prairie dogs, coyotes, feral pigs, and groundhogs across the globe.

The .22-250 was designed to hunt varmints over a long distance and after half a century, The .22-250 has become a benchmark to compare and measure all other 55 gr varmint ammo.

The .243 Win cartridges secure the crown here with a wide range of weights (55-100 gr) that can be used in varmint hunting and deer hunting alike. For varmints and other small games, a lighter bullet (55 gr) will make sure that the pelt isn’t damaged excessively.

For medium-sized games like deers, you’ll need a heavier bullet to penetrate through the hides and bones. A 100 gr .243 Win bullet will carry around 1,000 ft-lbs of energy up to 250-300 yards, which is ideal for taking a deer down humanely.

The answer to this question will always depend on what you are trying to shoot and from how far. For those who are primarily looking for varmint hunting, you can pick either one.

Both the .22-250 Rem and the .243 Win do great at close ranges. They will make sure to take the varmint down without causing severe damage to the pelt. The two rounds are so similar in this aspect that most shooters will hardly notice the difference. Harvesting trophies from long-range, however, is a different story. Here, .243 Win cartridges are a clear choice. That way you can hunt your trophy down with enough firepower for a humane kill.

Ans: Yes. .22-250s are powerful enough to take down whitetails without any issue. However, choosing the right bullet and proper shot placement is crucial for a humane kill.

Ans: Not really. Though the .243 Win rounds are usually a bit heavier and more powerful than the .22-250 Rem rounds, the .243 Win also features lighter bullets (55 gr) which will work just fine for coyotes.

Ans: Around 250 yards. After that, the bullet stops being competitive and after 350 yards, the bullet becomes unable to hold itself under multiple winds. The highest distance the .22-250 can travel is around 400-500 yards.